A hero of our times

On a chilly day in January last year, Laqini Bayika, a 41-year-old border patroller who was then studying at Kashgar University, was going to lunch with a friend when he stumbled upon a young child who had fallen through the ice into a lake.

Without a moment's hesitation, Laqini quickly ran to rescue the boy and tried to grab his hands but the ice gave way. He used the last of his strength to hold the 5-year-old's head above the water's surface, earning precious time for another person to complete the rescue. Tragically, Laqini himself could not be saved.

This story of his heroism has been retold in the biographical movie,Why Are the Flowers So Red. The title is derived from the theme song of the popular 1963 classicVisitors on the Icy Mountain.

Scenes from the movie feature Laqini (right) and his father (left) with two soldiers during a border patrol.[Photo provided to China Daily]

With Kutilukejiang Aishahujia, a young man who grew up in a family of patrollers, making his acting debut as Laqini, the movie produced by Tianshan Film Studio, in Northwest China's Xinjiang Uygur autonomous region, was released in domestic theaters on March 18.

Interweaving flashbacks featuring Laqini's father and grandfather's devotion to their work on the Pamir Plateau several decades ago, the movie chronicles the life story of the protagonist, from how the young Laqini was deeply influenced by his family spirit to his friendship with the son of a People's Liberation Army border force soldier.

Depicting the shoot as a "harsh yet unforgettable experience", Gao Huanggang, the movie's chief producer and scriptwriter, recalls that he paid a visit to Laqini's home.

Scenes from the movie feature a young Laqini (right) enjoying a close moment with his father.[Photo provided to China Daily]

"It was a day that dark clouds gathered in the sky. I sat alone in his small courtyard, pondering how the script could precisely recount his short, yet shining, life within such a limited film length," recalls Gao.

A sort of poetic, yet melancholy, scene seized his attention. Near a cowshed of yaks that once transported Laqini and PLA soldiers to patrol the China-Pakistan border, Gao got a glimpse of the lonely figure of Laqini's father, Bayika Kalidibek, who, not surprisingly, was still struggling to come to grips with the loss of his son.

Gao says that the moment made him remember that the 68-year-old father even tried to comfort the mother of the rescued child when she mourned the death of the hero.

"I once wondered about things such as 'what made Laqini Bayika jump into the icy lake regardless of his own safety?' and 'what shaped his personality?'

"I believe I have found the answer at the very moment, which is the core of the movie," says Gao.

Why Are the Flowers So Redtells the heroic story of border patroller Laqini Bayika from Northwest China's Xinjiang Uygur autonomous region.The film chronicles his last moments when he sacrificed his life to save a child.[Photo provided to China Daily]

Born as an ethnic Tajik in Xinjiang's Tashikurgan Tajik autonomous county in 1979, Laqini had dreamed of being a patrolman, following his father-who had worked as a patrol guide for more than 30 years.

He became familiar with the tortuous terrain as a teenager.

In 2003, he followed in his father's footsteps, taking over the family tradition of helping the Khunjerab border force to carry out their missions, with the most treacherous route winding through a 100-kilometer-long valley that frequently experiences avalanches and landslides.

The border patrol route, near the Khunjerab Pass, is the only one of its kind in China where yaks alone are able to transport soldiers.

"It's incredible for most of us to picture how dangerous and harsh it can be in these uninhabitable areas," says Gao.

For director Abdukerim Abliz, the movie marks one of the biggest challenges in his 30-year filmmaking career.

Recalling that he decided to helm the movie merely two days after hearing the news about Laqini's sacrifice, the director reveals that he already had an image in mind of what the film should look like, following his experience of shooting the 2021 musical movie,The Wings of the Songs, in Xinjiang.

Abdukerim says that he adopted a method of making the cameras "move" tightly with the actors, thus enabling audiences to feel like they're walking shoulder-to-shoulder with the characters, effectively putting the viewers "in the movie".

Why Are the Flowers So Redtells the heroic story of border patroller Laqini Bayika from Northwest China's Xinjiang Uygur autonomous region.[Photo provided to China Daily]

"The movie is developed to follow Laqini's point of view, which will also make the audience feel more involved and closer to the protagonist's inner world," says the director.

A crew of around 160 members was gathered to shoot the film over a period of 70 days, with most of the scenes filmed on the Pamir Plateau.

The director says that, regardless, they persisted in their work, taking inspiration from Laqini's heroic spirit and all the unsung Tajik heroes who have risked their lives and endured loneliness on the patrol to safeguard the country over generations.

"Their dedication amid the extremely harsh environment is what has motivated me to direct this film," he says. 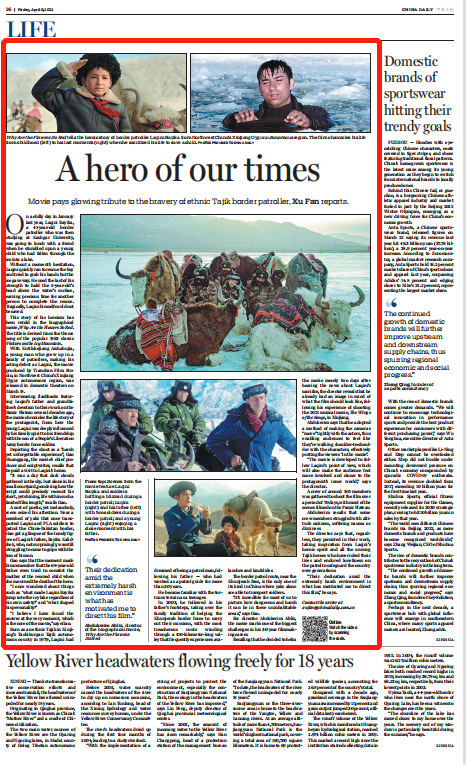