Scenes featuring protagonists in five stand-alone stories of the film, one played by Shen Teng.[Photo provided to China Daily]

With a stunning 10-day box-office haul surpassing 2 billion yuan ($297.5 million), the anthology blockbuster My People, My Homeland has propelled the recovery of Chinese film industry－and that's despite China's theaters still being limited to a maximum 75 percent seating capacity.

Gathering seven directors to helm five stories, the celebrity-studded film adopts a comedic tone to illustrate China's efforts to get rid of poverty.

Opening on the first day of China's National Day holiday, the film has beaten other new releases－such as the animated hit Jiang Ziya: Legend of Deification and Jackie Chan's action movie Vanguard－to maintain its position atop the country's box-office charts since Oct 3.

Producer Zhang Miao from Beijing Culture, known for its blockbusters Wolf Warrior 2, Dying to Survive and The Wandering Earth, recalls his studio was contacted by the China Film Administration－the country's top sector regulator－to ask them to produce the project, which had Ning Hao on board as chief director. Seeing the project as a difficult and tightly scheduled mission, Zhang and Ning decided that the film should expand its settings to both rural and urban areas, conveying all Chinese people's joy and happiness to be part of a well-off society.

When Zhang and Ning, alongside other major creators, held a brainstorming meeting in early October last year, they were inspired by the then holiday hit My People, My Country, the first Chinese movie of its kind to bring several prestigious directors together to create different short tales under one overarching theme.

With a stellar cast and a theme in keeping with the patriotic mood surrounding the celebration of the nation's 70th birthday, My People, My Country reaped 3.1 billion yuan, topping the box-office charts during the 2019 National Day holiday.

Scenes featuring protagonists in five stand-alone stories of the film, one played by Ge You.[Photo provided to China Daily]

"Besides, short videos have enjoyed a prosperous development in recent years. Youngsters account for the majority of Chinese moviegoers, leading us to believe that the omnibus format will continue to be an attraction for holiday audiences," he adds.

As one of the country's most commercially successful directors, Ning excels in producing black comedies that explore social issues from a grassroots perspective, exemplified by his Crazy series, ranging from the 2006 Crazy Stone to the 2017 Crazy Alien.

Within a single week, they enticed the other six directors to join the project, with Ning, Xu Zheng and Chen Sicheng to respectively helm one tale each, while the duos of Deng Chao and Yu Baimei, as well as Yan Fei and Peng Damo, would take charge of the remaining two stories.

Scenes featuring protagonists in five stand-alone stories of the film, one played by Huang Bo.[Photo provided to China Daily]

In the first tale, Ning's directorial effort recounts the story of a Beijing parking lot cashier's "scheme" to help his poor uncle pay off expensive hospital bills through his own medical insurance by having his sick relative masquerade as him.

While Chen's segment sparks thought about the proper way to boost rural tourism through the "mystery" of a supposed unidentified flying object sighted in Guizhou province, Xu's latest outing reflects the economic development in rural Zhejiang province through a tear-jerking tale about a former village teacher.

Scenes featuring protagonists in five stand-alone stories of the film, one played by Deng Chao.[Photo provided to China Daily]

Tickling the funny bones of many audience members and stirring up a fair amount homesickness among viewers, the movie has accumulated popularity online, exemplified by a score of 9.3 points out of 10 on Maoyan and 9.2 points on Taopiaopiao, two of the country's largest ticketing platforms. But some viewers criticize the film as just being a hodgepodge of comedy sketches, making it－as they believe－unqualified as an authentic production for the silver screen.

Hu Zhifeng, vice-president of Beijing Film Academy, says the film－coupled with the similar blockbuster My People, My Country－has demonstrated the potential for anthology films to form a new genre tailored for a holiday market.

"Theatergoing has turned into a ceremonial activity for some Chinese people during holidays," Hu explains. "The film skillfully caters to Chinese people's collective patriotic pride during the festival, evoking their memories about familiar hometown elements, such as landscapes, dialects and local customs. Its success indicates that such a genre can continue to be explored." 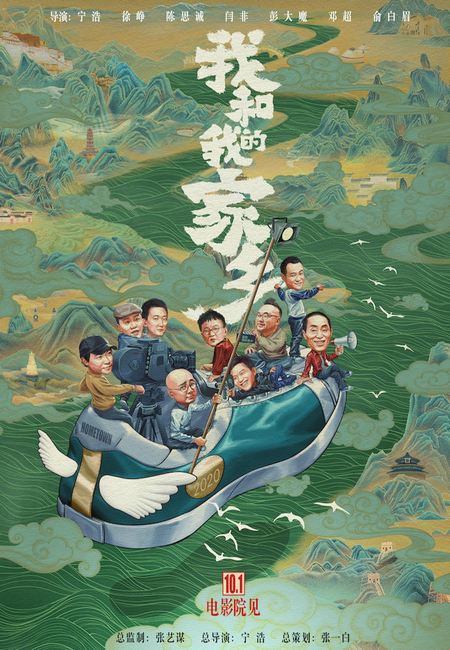 Poster of National Day blockbuster My People, My Homeland feature the directors and producer of the film and roles in one of the stories about a former village teacher. [Photo provided to China Daily]

Earlier this year, the COVID-19 outbreak suspended the production of hundreds of film and TV projects, and closed domestic theaters for six months.

Talking about the anthology format, which helped My People, My Homeland to conclude shooting in a mere 26 days－compared with the usual three or more months required by many feature-length movies－Dai Qing, a film and TV professor at Communication University of China, says several teams working simultaneously in different locations to shoot one film may provide an efficient example to fellow filmmakers during extreme situations. 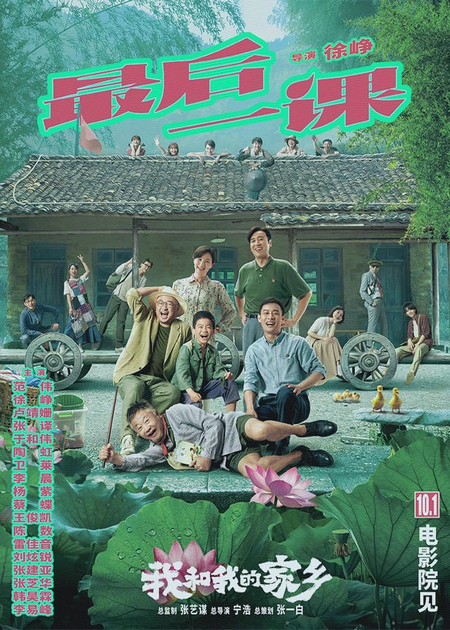 Poster of National Day blockbuster My People, My Homeland feature the directors and producer of the film and roles in one of the stories about a former village teacher.[Photo provided to China Daily]

On the heels of the National Day box-office bonanza, it was announced that a dozen of new films will be released during the 2021 Spring Festival holiday－one of China's two weeklong public holidays and another hot box-office period.

The lineup includes several major releases pulled from this year's Spring Festival release schedule due to COVID-19, such as Detective Chinatown 3 and The Rescue, alongside new and highly anticipated titles like New Gods: Nezha Reborn and Assassins in Red.